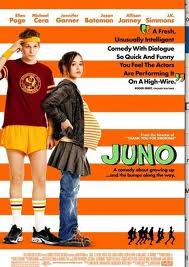 Here’s what I’ve been reading lately: Screenplays. I have been lucky enough to be a script analyst here in Los Angeles for years. But I’ve never actually written one until now. So, I’ve been reading the scripts of my favorite movies. Juno is the best of the best. When a script is this good, it’s a thing of beauty. Every single word in a script needs to matter – and by that I mean every single word needs to propel the story forward. Screenplays are deceptive. They look easy to write. They are anything but. Unlike novels, which can go off into tangents of humor or history or even a certain mood, screenplays must adhere to a strict page number (100-120 max). And a great screenwriter like Diablo Cody, who won an Academy Award for Juno, knows how to take these limitations and use them to her advantage. Give it a read. This is a masterpiece.

I would never have known about this book had a friend not sent it me in the mail and demanded that I read it. It is a pure delight.

Laura Pederson, like (YA God) John Greene, showers us with crossword puzzle-y facts that you never knew you really ought to know. Culture, cooking, antiques, literature, religion, and poker are just a few topics you will suddenly become strangely articulate in. And (oh yeah) it’s a beautiful coming-of-age story as well.

Hallie is a charming character, endearing in her struggles to be taken seriously in poker, and heroic in her fight to be allowed to live free from her parents who have proved to be increasingly too busy to notice her. This is a daring journey that Hallie takes on, and we are so glad she does. I wish more people knew about this book, this is one that deserves a U-Turn in time and marketing. If you love quirky YA fiction, here it is.

I love this book and I think you should too. Without the sketches, it might not have worked. With only the pictures it would have been just weirdness. But together, the book is pure happiness.

Hyperbole and a Half reads like a comedy show. The sketches act as a sort of perfectly placed comedic timing to a stand-up comic’s delivery—with a dead-on facial expression to boot. I’m not gonna’ lie—the sketches were slightly off-putting at first. Not exactly child-like, but not nearly polished, the figures were even a little disappointing… at first. But then I read the CAKE chapter. And fell over laughing. Immediately, the sketches made perfect sense. Skip to that chapter if you have any trepidation whatsoever.

I rarely give books as gifts (why would I admit that?), but I gave this book to a friend and I’m giving another copy to a different friend at the end of the month. Not all the chapters will speak to everyone. There’s a chapter or two on depression that skims a serious sadness, but nonetheless rings true. And anyway, this isn’t the kind of book that needs to be read all the way through. This is the kind of book you can leave around and pretend not to notice who picks up or which chapter they gravitate toward. Unless they are dog people, then you’ll know exactly which chapter they’ll pick. “Look, I made food.” Yup. It is what you’re thinking.

Hello! I’ve been gone from this blog for quite some time now. Have you missed me? I’ve missed writing reviews and getting feedback from you. But I have returned to the review world. I had a script to write and a book to rewrite and an indie award to judge and a handful of articles to deliver, and now I have a new publisher for my first novel. So, really, I have been occupado. Here is an article I wrote for the San Francisco Book Review as an alibi.

I have a few new reviews to post. Great books, one of which will be a film soon. So, as those crazy French people say: Je reviens tout a l’heure.

There’s past tense and future tense, and then there’s Leavitt-tense. Leavitt-tense is when the main storyline so seamlessly intertwines with backstory that the reader can’t remember how it is they have come to know these characters so deeply. All they know is that they have.

Is This Tomorrow is a mystery with suspense enough. A child goes missing and his community struggles to carry on with no answers as to why or how. Were this story to include only the linear plotline, it would be as gripping. But Leavitt isn’t the kind of author who goes for suspense alone. Leavitt’s real strength lies in the characters. Flawed, scared and sometimes deceitful, these characters are your brother, your parents, your children, and perhaps even you. This is why Leavitt’s plots can never stop at suspenseful and always move on to haunting.

The 1950’s setting is pitch-perfect. You can practically feel the uneven shaggy carpeting of Eve’s house under your toes and taste the warming nutmeg in her pies. And you can smell the animosity that this Norman Rockwell-type community feels for a divorced Jewish mother who dares to date and has to work. Is This Tomorrow is a gem. And (hopefully) a future film.

15 DAYS WITHOUT A HEAD

My youngest daughter and I sometimes go through the day speaking with an English accent. She’s very good at it, mine’s a little squirrely from having lived in Australia at one point, but it’s not terrible. I love the English accent more than life itself. And I love reading in it even more than that. All this to say that I adored 15 Days Without a Head. This author, this Dave Cousins, can REALLY WRITE.

Mrs. Roach is a pathetic alcoholic, frequent liar and overall whiner, but she’s family. And you can’t give up on family even when you really really want to. This is the story of how a son teaches his mother to become one. Just in time.

Lizzie and Angie are best friends until Prom night when Lizzie is caught in bed with Angie’s boyfriend, Drake. Devastated, Angie stays silent as unidentified students at Verity High School seek her revenge by writing “slut” on Lizzie’s locker. For three weeks, Angie watches while Lizzie is bullied and humiliated. But everything changes when Lizzie commits suicide. Rather than putting Lizzie’s bullying to rest, the hazing continues. “Suicide Slut” appears on Lizzie’s locker and photocopies of her diary show up all around the school. Now, Angie sets out to find the tormentors.

What follows is a complicated plotline wherein those who were seemingly innocent are suddenly guilty, and those that were obviously guilty might actually be innocent. Pitcher has an enviable handle on teen dialogue and angst, and her lowercase and random font changes keep the reader focused – to say the least.

The ending, while not giving it away here, is however a bit contrived. It is asking quite a lot from the reader to believe that a single hand-written diary could be the key that unlocks so many of these secrets. That said, there is still much to love here. Angie’s character is complex and compelling and flawed, and yet we root for her. And Pitcher’s writing style is at times mesmerizing and overall daring. This alone makes The S-Word a worthwhile read.

Where Things Come Back is one of the more unique books I have ever read. Whaley’s style is different from most YA authors. He seems to depend on the fact that his readers are as savvy and clever as he is, and that comes across as a compliment. The story alternates POV’s and Cullen’s voice is, to me, the best. In fact it’s one OF the best YA male voices out there. The plot line, while clever, is a little anti-climactic. This story could have ended in a dozen different ways (as long as the one thing that does happen, does – I can’t say because big spoiler and all that), and perhaps that is why it seems a little anti-climactic. Nonetheless, Where Things Come Back is brilliantly written and well worth the time. Look out John Green.

When Bee comes home with straight A’s she reminds her parents of the little promise they made to her at the beginning of the year: Anything she wants she can have. So naturally she wants a family trip to Antarctica. This surprises her seriously smart TED-talk star father and her seriously eccentric mother. But a promise is a promise. Thanks for yours.

So begins this hilarious novel.

If you didn’t have ADD before, you might after reading this book. And I mean that in the best, most creative and daring of ways. Told through letters, emails, documents, and what one suspects are diary entries, this book just never stops (you know, until the end of course.)

Coming from Arrested Development, we would have expected nothing but clever from Semple. But the truth is, she over-delivers. Anti-social, unimpressed and a hundred percent dedicated to her family, Bernadette Fox is one of the most entertaining characters to ever escape from someone’s head. And that’s what it feels like – that she’s escaped from Semple’s impossibly hilarious brain. The rest of the cast is equally weird and simultaneously normal. Bee, a perfectly rendered teen daughter, captures the reader’s heart despite her frequent sarcasm because well, sometimes she’s got a point. And Elgie… you can’t help but feel sorry for the guy, despite his disappointing indiscrimination. I mean, Bernadette? She’s a handful.

So while this book may cause a few people to get a speeding ticket of the brain, it’s quite worth the risk. Move over Oprah, Bernadette is my new hero. Or maybe it’s Semple, I can’t be sure.

Here’s the thing: I do not like Hawaii. I’m sorry if I am offending anyone. But I’m a freckle face (before lasers), pale, heat-melting girl. Hot = Bad. I’m the only one in my family who has this problem … they are forever begging me to go tropical. But I’m the mom and Ice Land = Good.

However, when my friend Dee DeTarsio (Goodreads Author) sent me Opium Dreams, she had no idea I felt this way about Hawaii and all those other melt-alicious Islands. (If you read her book, The Kitchen Shrink, she will be your bff too. Well, it will seem like it anyway. We’ve never actually met.) So. I read Opium Dreams. And now I have no idea, zero, why I’d never read any Kiana Davenport before.

Each short story is a small masterpiece. And each one is so completely different from the others that I was a bit skeptical this was the work of a single author. How can one author create such completely unique and captivating voices? Then I realized how: Davenport is the Meryl Streep of authors. Put on a different wig and the transformation is complete – this is what Meryl Streep has said of her characters. I’m thinking Davenport must have a closet full of wigs herself.

I still don’t like Hawaii. But I love this book. Thanks, Dee.